Tattoo: The Making of a Magazine 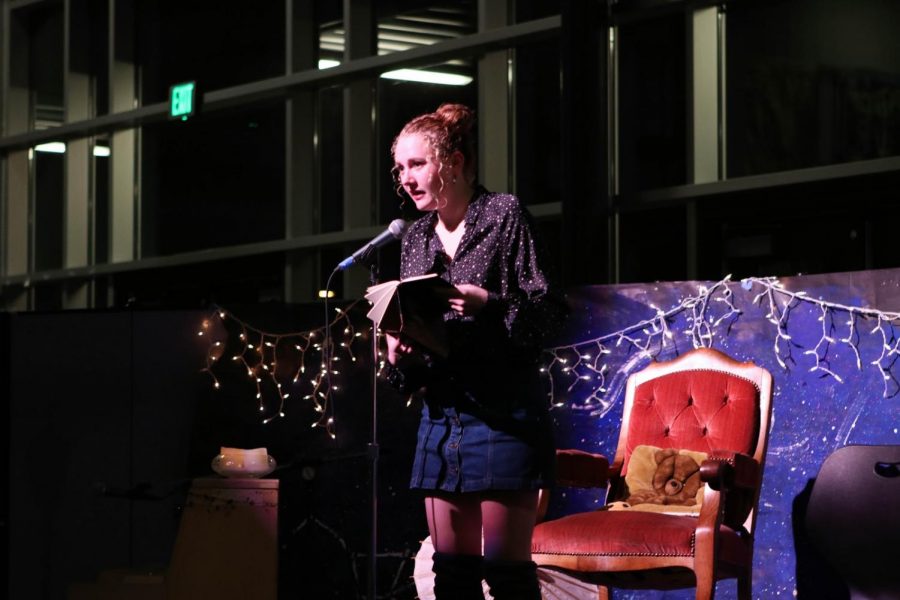 Editor Haley Larson stands reading one of her poems at the microphone of Tattoo’s Coffeehouse.

The editors of Tattoo will be the first to tell you that the magazine is overflowing with traditions, with everything from Coffeehouse (the biannual poetry reading held to commemorate the launch of their newest issue) to the finishing touches on the backdrop. The process, however, of enacting these traditions is what makes the club special or unique.

To start with, the magazine opens submissions for a period of about two weeks, allowing anyone to submit for consideration in the publication. “Then comes the fun part,” said one of Tattoo’s editors, Mumina Ali, “where we vote on the pieces during weekend voting parties and club meetings on Thursdays.” The process is done anonymously, but takes weeks, and several out-of-school meetings at the Editor-in-Chief’s house. During the vote, participating students are made aware of two limitations: their maximum number of colored pages, and the maximum number of swear words they are allowed. These meetings, affectionately called ‘voting parties’, encourage club participation, as well as allow anyone who comes to discuss each piece thoroughly. This is simultaneously interwoven with other club duties, such as advertising, and monthly ‘mini-coffeehouses’ for students to share any of their work or any published pieces that they wish to read (with credit given to the artist).

Afterwards, editors meet to choose one piece of submitted art to serve as the cover of the magazine. Then, the magic begins. “Our editor in chief, who is currently Haley Larsen, leads the process of ordering and placing them into a draft,” said Ali. Editors then put together a magazine that provides both flow between the pages, and a pleasing spread on each page. This is harder than it may sound at first, as there is no suggested theme for any submissions, and continuity is not considered during the voting parties. Editors can often be faced with dark poems and bright photos, or vice versa. “Haley will make final adjustments and we revise and edit before sending the draft to the publisher,” said Ali, “We then work with the publisher to bring the magazine to life!”

In addition, editors are tasked with responding to every submission email to inform the artists of whether their pieces were accepted – a process that takes long lists, and templated emails. Each piece of work submitted is considered individually and receives its own response as to whether it has been accepted or not. With the magazine underway, the club then comes back together to decide on a coffeehouse theme, which is usually a broad subject such as ‘space’ or ‘masquerade’, and then begin organizing for the event.

Club members work together to paint large advertisements, including the Common’s banner, and the backdrop for the event itself. “It changes slightly every year. It’s an event, so no two Coffeehouses are the same” said Ali, “Our most recent Coffeehouse had a space theme.” This process may take as long as a few weeks, or as short as a few days, depending on the number of participants. Club members are encouraged to help with this, under the supervision of one of the editors. This, however, is where the traditions begin. To commemorate the completion of the stage banner, the Editor-in-Chief puts their footprint somewhere on it, after having coated the bottom of their foot with paint. Once the stage is set up, the editors bring down a chair from the advisor’s room, known as the ‘Prose Chair’, for anyone whose pieces may take a while to read.

Despite all of the student involvement, submissions and Coffeehouse attendance are waning, “ Tattoo is a 55-year-old tradition that isn’t as prevalent anymore,” claimed Ali, “I think the reason is because students aren’t creating as much.” Ali isn’t alone in this assumption. Over the past two years, several long-standing clubs have gone under due to a lack of interest. Clubs like Needlecraft club have seen over a 50% decrease in regular club attendance, and the Highland Piper itself has just recently recovered after going under at the end of the 2016-17 school year. Even the Annual may disappear in the next few years if the current trend continues. The class, which had previously been so full as to have competitive admittance, has shrunk to a mere 14 students. To keep the Annual alive, the class had to merge with the remains of the Highland Piper.

The solution to this, of course, is for students to sign themselves up. The driving force behind traditions are the students who participate in them year after year. All of these things – like an up to date newspaper; a pristine, student centered yearbook; or a biannual publication of student made art – need students to step up and take the wheel, or risk losing what makes Shorecrest special.