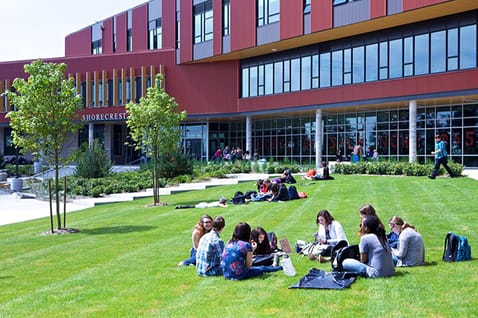 Going into my sophomore year, a new addition has just recently been added on top of my  new classes, courses, and activities. What is this, you ask? Scheduling changes within a normal week- Early release Wednesday’s. What is an early release Wednesday? An early release Wednesday is exactly how it sounds- a shorter, 35-minute class period version of a Wednesday where students are released at 12:55. For me, these shorter Wednesdays have been a new and interesting adjustment that I have had to get used to quite gradually. When this schedule change first hit Shorecrest, I was reluctant to accept them because I, being the very lazy individual that I am, do not wish to walk the two miles that it takes for me to get home everyday. Unfortunately I, had to suck it up and get used to it, like every other challenge within my life.  After four months of homework, lectures, tolerance, and unwanted exercise, I’ve come to wonder quite a few things. First, what really is the point of these early release Wednesdays? Why labor through six quick, short-paced thirty-five minute class periods? To me, I’ve realized that each Wednesday results in simply sending hundreds of students to flood the hallways hurriedly (in order to avoid a tardy) to a class, lunch, or better yet, home. Now, I’ve finally stopped to analyze the situation fully. Are these Wednesdays really supposed to aid students excel in academic achievement? I’ve come to terms with an answer- both yes and no.

With these early-release Wednesdays, I have come to the conclusion that the amount of academic success a student reaps from the day solely depends on the student. For a typical block period, a class contains a time period of  two hours and thirty-five minutes of time. Here, one has the perfect opportunity to learn new concepts, understand problems, and get started on work in class. Yet, again, the likelihood of this occurring depends on the student once again. While seemingly the better option, a student must put their mind to the task- something that not all individuals within a school are willing to do. In connecting this reasoning back to the topic at hand, Jasmine Hughes, a Shorecrest sophomore, describes that, “In all honesty, I normally use the time available on Wednesdays to relax and watch television… This doesn’t occur all of the time, but I don’t want to lie!” As a single student can not speak on behalf of the whole student body, I’m sure that many students utilize the time gap on Wednesday afternoons to engage in other activists, but I can understand if Jasmine is not the only student that relaxes after the school doors have closed.

On the other side of the spectrum, an enticing argument has been used to support these new scheduling changes. To many others, Wednesdays have been imposed to support and benefit students of Shorecrest, but not in ways that you might think. These Wednesday’s are not only designed to benefit Shorecrest students, but to staff of Shorecrest as well. For staff, the time available after 12:55 pm on Wednesdays is specifically given to teachers so that they are able to discuss, observe and learn from fellow teachers from their own department as well as others. When meeting with principal of Shorecrest, Lisa Gonzalez, to discuss the effects and importance of early-release Wednesday’s, Ms. Gonzalez reminds us that, “Us teachers need to learn from each other, too!” In taking in this information, I realize that here,  in the modern world that we live in, the roles that teachers possess in our lives are crucial to our success and ability to learn/grow as students. In teachers, knowledge possessed may be passed on to students and absorbed through our minds. From this newfound knowledge and insight, we, as students, are impacted in  our perspective and the outlook that we possess towards our world. So, using Ms. Gonzalez’s key points, I am able to understand the desire that many teachers possess towards having the opportunities to learn from their peers and fellow teachers. In hindsight, this determination to keep these Wednesday’s is not only for the benefit of themselves, but for both their current and future students as well.

In comparing modern Wednesday’s to past staff-day Monday’s, Ms. Gonzalez recounted that when she had first worked at Shorecrest High, early-release days had been on Mondays instead. To me, I now wonder if the Shoreline School District will ever relapse back to schedules without early release days. Although we’ve only had early release Wednesdays for a short period of time, staff state that the time available after students are released early, has already been quite beneficial. Going back to Ms. Gonzalez’s points, the Shorecrest principle states that she has already noticed a change in staff performance and preparedness for lesson plans, and hopes that the community as a whole can soon reach a point where we say, “The work we do here has really made an improvement for the students!” In totally honestly, I myself, will probably still grumble about my two mile walk to reach home every Wednesday, but I now know that these Wednesdays of minuscule suffering contribute to a bigger picture of success- both student and staff. Within these next few weeks, months, and even years, I truly hope that one day,  we will be able to achieve the selfless goals that Mrs. Gonzalez has put her efforts towards!