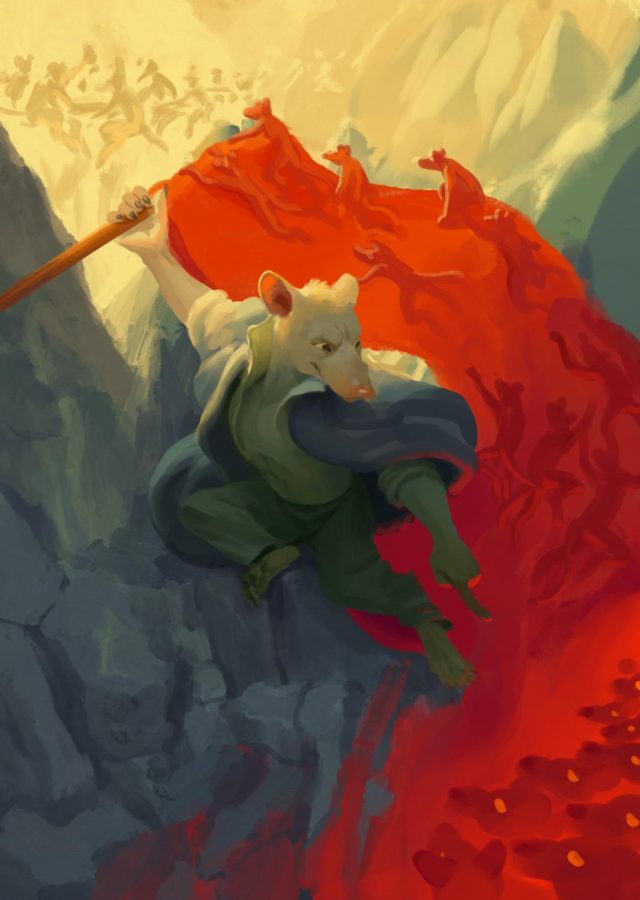 Tooth and Tail has been described as “Redwall plus the Russian Revolution plus cannibalism.” A civil war has broken out amongst the animals over who gets to eat meat, and who has to be the meat. As the four factions are fighting for control, you switch between the groups and get to lead each in turn. You start off playing as Bellafide leading the Longcoats, then, after fighting five or so battles, you get to lead the Commonfolk as Hopper, and so on. This really gives you a feel for why each faction is fighting in the war, and makes them more than just four different colors. There is also multiplayer, with split-screen, online, and ranked matches you can play.

As the leader of a faction, your character acts almost as the mouse would in a standard Real-Time Strategy game. Your character is used for constructing buildings, scouting the enemy factions, and leading your troops into battle. Pressing the right trigger makes all your troops go to you, and the left trigger only brings one type of unit. While these simplified controls don’t let you do complicated maneuvers, such as splitting your army in half and attacking from two sides at once, I think it matches my play style more; get a bigger army than the enemy, then wipe them out. You begin each standard battle with one gristmill, which is a windmill with eight fields around it. You can begin farming on the fields by spending 60 meat. Each farm gives you meat over time. You also use meat to build warrens, which will periodically make units up to a point. For example, it costs 60 meat to make a squirrel warren, which, after being built, will make a squirrel every 10 seconds until the cap is reached. What’s really nice is that after you charge into battle and lose a few squirrels, the warrens will automatically begin making more squirrels to replenish your army.

The gameplay is very easy to learn, especially compared to more traditional RTS games like Starcraft. Each match is between five and fifteen minutes, compared to an hour or more in other RTS games. Tooth and Tail really is “Real-Time Strategy Distilled.” You only use three buttons, a joystick to move, and another joystick to select the type of unit to create. The simple controls also make it playable with a controller. I’ve been playing Tooth and Tail with a Steam Controller, and I feel like it’s actually easier to use than a keyboard and mouse.

The music is amazing. It goes really well with the idea of a Russian Revolution. It sounds like a bunch of very drunk anthropomorphic animals singing along to a slightly less drunk band. You can find the soundtrack on Youtube. Go listen. Tooth and Tail also has its own language, Vyeshal, which sounds vaguely like Russian.

The multiplayer is fun. Each player gets to pick a faction and six types of units that they can use during the battle. The map is procedurally generated, making you “strategize rather than memorize.” I like the random maps. Even though they will sometimes give one side an advantage, they make each match different. Split-screen multiplayer is decent on a TV, though I doubt it would be good on a standard monitor.

Despite playing countless multiplayer battles with my dad, the story mode was still challenging. It had more complicated missions, instead of the simple get meat, make units, kill the enemy style of gameplay in multiplayer. For example, in one mission, you start with a small group of units and need to free prisoners in order to get more troops. In between missions, you can hang out at your main base and chat with the soldiers, which I really enjoyed. After playing hours and hours of multiplayer before playing the Story Mode, talking to the soldiers really gave them more depth. For example, squirrels weren’t just squirrels anymore, they were alcoholic squirrels who were so drunk they couldn’t think about what they were getting themselves into.

If you enjoy Redwall, Russian Revolutions, or cannibalism, this game is for you. The amazing music, short matches, and simple controls make Tooth and Tail easy to play if you have a few minutes, or you could spend an hour going through the Story Mode. Even if you have doubts, check it out on Steam and watch the trailer. It may be your next favorite game.